While watching the Olympics, Ellie said, "I really like watching paralyzed diving!"

This made us laugh thinking about the paraplegic version of synchronized diving. 1... 2... 3... push!

Posted by Niffer at 7:11 AM No comments: 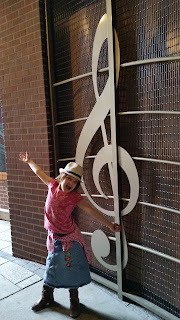 Addie adores her new musical skills and so I thought a perfect date idea would be to go piano hunting. When Ellie found out what the plan was for Addie's date, she was confused and asked for more details. She tried to understand how one hunts pianos and simply couldn't. Addie, on the other hand, didn't have a problem at all. "Ellie, we're going to hunt wild pianos in their natural habitat!" 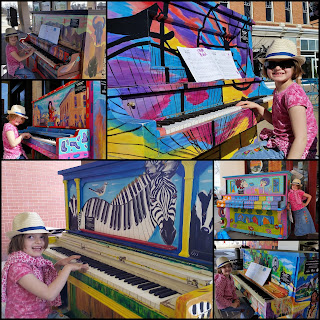 Ft Collins has a program called "Pianos About Town" in which artists have fixed up and painted beautiful pianos. Normally they don't tell people where the pianos are, but instead they're scattered around town for people to stumble upon in unexpected places. However, I was lucky to have convinced them to tell me where to look (I'm not familiar with Ft Collins and I wanted the day to be really special). It was magic! It seemed that every piano was better than the previous. She liked the ones with old keys the best, but also really liked the piano with the sunset. 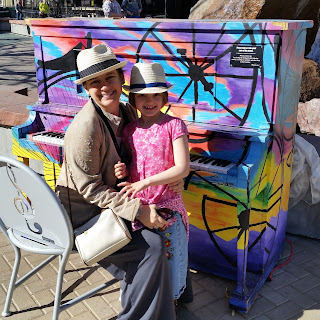 And watching the skills that this girl is developing? Mommy could not be more proud. We successfully hunted and tamed 6 wild pianos and the day could not have been any better.

Posted by Niffer at 9:42 PM No comments: 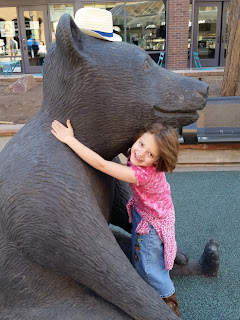 Posted by Niffer at 9:34 PM No comments: 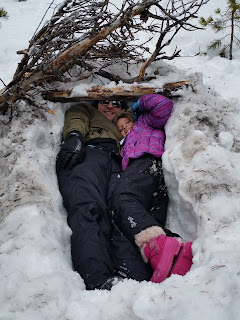 He took her to an ice safety workshop where they learned how to dig out a shelter to remain warm in the cold winter. He's always so good at coming up with unique ideas!
Posted by Niffer at 9:23 PM No comments: 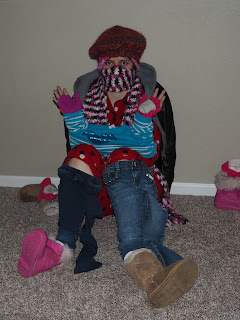 In French I asked the girls for pieces of clothing. They dressed me with the results. I think they're having fun learning a new language.
Posted by Niffer at 9:00 PM No comments: 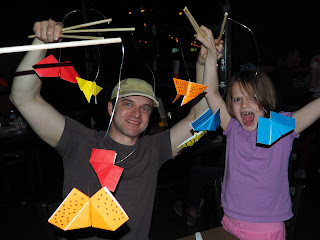 Daddy took Addie to an origami workshop where they learned to fold butterflies. Then they took their butterflies home and tied them to some rods. Finally, when we went to dinner, she handed out all her new butterflies to children who were eating with their families throughout the restaurant. She had a BLAST and loved the reactions she got from people when she gave them her gift.
Posted by Niffer at 9:19 PM No comments: 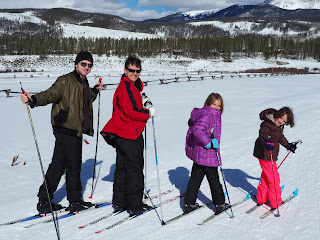 A few weeks ago we went skiing with Nana, Grandpa and Uncle David. I hadn't ever been and neither had the girls. I was surprised by how enjoyable it was! Ellie did amazingly well and was always ahead of the group. After a couple hours, she seems to have the technique down! Addie enjoyed herself too, though she definitely ran out of energy half way through the trip. I suppose that didn't surprise anyone since she's the smallest and was likely doing the most work. She didn't complain about it though. She was tired but distracted herself with stories about snow fairies and magical snow crystals. Eventually we hooked her up to a couple of scarfs around Michael's waste and he pulled her behind him until we returned to the lodge. I'm loving that the girls are old enough for these types of activities!
Posted by Niffer at 9:13 PM No comments: 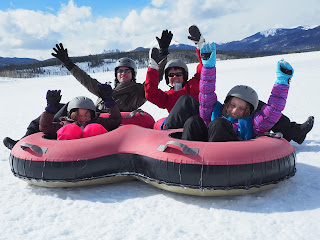 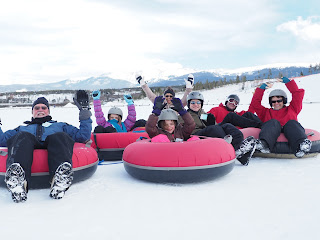 Posted by Niffer at 9:05 PM No comments: 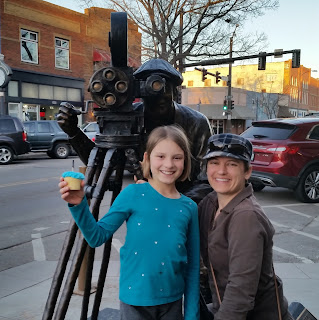 For our date this month, Ellie and I went to see a play called "Pirates of Penzance." Unexpectedly, this was an Opera. I can't say I've been to many operas and I'm thinking I'm not a big fan. Even Ellie asked for a break from the music after only a few scenes. That being said, though, it was probably the strangest funniest opera I may ever see. It was a pirate story that included an apprentice who left the pirates after having served his 21 years. He told the pirates that he didn't approve of their ways and now that he's no longer a member, he's going to make it his mission to take them down. They started complaining about all their problems and how they're not rich like pirates should be. He told them that's because their rule to not steal from orphans and the rumor has gotten around such that everyone claims to be an orphan if attacked by these pirates. The ex-pirate falls in love with a woman who is the daughter of a general. The general tricks all the pirates into letting him and his daughters go, and later feels guilty about bringing shame to the family name because he lied to the pirates about being an orphan, only to have someone point out that the graves he's crying on aren't his ancestors. Afterwards, the pirates tell the ex-pirate that he owes them more time because his contract says he would serve 21 birthdays, of which he's only served 5 because he was born on leap day. Out of a sense of duty, he returns to the pirates and asks his fiancee to wait for him to return. Though waiting another 60 years seems like a long time, she agrees. In the end a group of police officers attack the pirates for crimes against the queen. The pirates said "wait, but we love the queen!" And of course since everyone loves the queen, they decide they're all on the same side. And everyone lives happily ever after.

I'm guessing not every opera has quite the... entertaining, perhaps... story line and I'm not sure I'll be going to too many operas in the future. However it was more entertaining than I would have expected had I known it was going to be an opera ahead of time.
Posted by Niffer at 8:47 PM No comments: 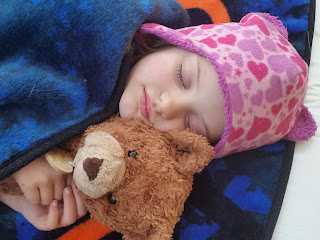 I adore the fact that 99% of the time, Addie goes to sleep holding Bussi Bear and wearing the same bear hat she has had since being 18 months old.

Posted by Niffer at 8:30 PM No comments:

OTHER BLOGS BY NIFFER